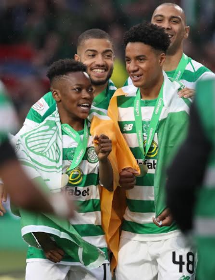 Allnigeriasoccer.com has been told that English Premier League club West Ham United are on the verge of confirming the signing of Nigeria-eligible winger Armstrong Okoflex.
Okoflex ended his association with Scottish Premiership giants Glasgow Celtic by putting pen to paper on a two-year contract with the Hammers on Monday, June 21, with an option for an additional season inserted into the contract.
Though the 2002-born player is joining West Ham as a free agent, Celtic would be due financial compensation.
West Ham United have pulled off a transfer coup with the signing of the hugely talented Irish-Nigerian winger, beating Newcastle United and Crystal Palace to his signature.
The Magpies attempted to sign the teenager this summer without success while the Eagles saw their bid rejected by Celtic before the close of the summer transfer window in 2020.
Okoflex thought it was time to depart Celtic because they are going through a transition and it would be difficult for him to break into the first team.
He came through the Arsenal youth ranks, spending five years at the academy and turned down a scholarship prior to his switch to Celtic in the summer of 2018.
Ifeanyi Emmanuel
Copyright ANS