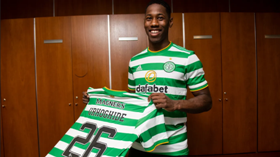 Scottish Premiership giants Celtic have pulled off a transfer coup by signing 2019 Nigeria U23 invitee Osaze Urhoghide.
The central defender was linked with a plethora of clubs in England and overseas but has opted to join The Hoops after turning down a new deal at demoted Championship team Sheffield Wednesday.
Born in the Netherlands twenty years ago to Nigerian parents, he moved to England aged five.
Urhoghide has signed a four-year deal with Celtic, keeping him at Celtic Park until at least the end of the 2024-2025 season.
The former AFC Wimbledon youth-teamer is looking forward to working with new Celtic boss Ange Postecoglou.
Speaking to Celtic TV,  Urhoghide said : "It feels great to get it over the line. It’s been a long season making a decision where to go, and it’s good to be here at Celtic.

"To have the manager speak to you and to know he wants you is great. He told me the plans he has to get to the next level and it’s good to know the manager wants you in his plans to succeed."
Urhoghide made 21 first-team appearances for Sheffield Wednesday before becoming a free agent.
Igho Kingsley
Photo Credit : celticfc.com
Copyright ANS