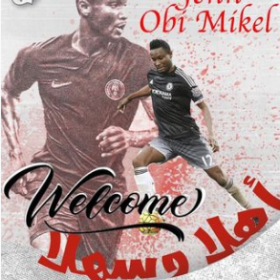 Kuwaiti Premier League side Kuwait Sporting Club have confirmed via their official Instagram account  the signing of former Nigeria international John Obi Mikel.
Though the financial terms of the deal have not been disclosed, the defensive midfielder will be a player of Kuwait SC until at least the end of the 2021-2022 season.
In a two-minute, 24-second video posted on Kuwait SC's Instagram page, Mikel thanked the President of the club for having faith in him and vowed to put in his maximum effort to help the club achieve their goals next season.
In his first words after the deal was confirmed, Mikel said : "I am very happy to sign for Kuwait SC, I thank the President of Kuwait SC for the trust that he has given to me to come to Kuwait.

"I promise to be on my best level to help the team to make sure that together as a team we can achieve a great season next year and hopefully we can be successful".

Mikel previously had spells with foreign teams in England, Norway, China and Turkey.
The ex-Super Eagles captain recorded 372 appearances in all competitions during a ten-and-a-half-year association with Chelsea, including 59 matches in the Champions League and four in the knockout rounds of the Europa League.
Ifeanyi Emmanuel
Copyright ANS
All rights reserved. This material, and other digital content on this website, may not be reproduced, published, rewritten or redistributed in whole or in part without prior express written permission from allnigeriasoccer.com