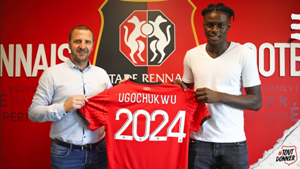 French Ligue 1 club Stade Rennais FC have announced through their official website that promising defensive midfielder Lesley Ugochukwu has signed a new deal.
Rennes have extended the contract of the 17-year-old midfielder for another season, until the end of the 2023-2024 season.
According to celebrated French sports daily L'Equipe, Lesley is the nephew of former Nigeria international central defender Onyekachi Apam, who wore the colors of Rennes for four seasons, 2010-2014.
Last summer, Ugochukwu appended his signature to his first professional contract with the Brittany club.
He was on the periphery of Rennes' first team in 2020-2021, making his senior debut against Dijon in April, started against PSG the following month and featured against Nîmes Olympique on the final day of the campaign.
Ugochukwu is honoured to extend his contract at Rennes and hopes to be involved with the first team again next season.
"It's a lot of pride. It is, in quotes, the reward for my efforts. I thank Stade Rennais, my parents and my agents," Ugochukwu said.
"I am very happy. I worked for. I was very well received in the professional group. It was not difficult to fit in.
"The leaders have confidence in the young people of the center. It's good for the future of the club.
"The objective is to impose myself in the group, to play more and more matches and why not to impose myself as a holder. I am a kid of the club and I am very proud of it. "
Born in France, Ugochukwu played for the youth teams of ASPTT Rennes and CPB Nord Ouest Foot before joining Rennes in 2012.
Igho Kingsley
Photo Credit : staderennais.com