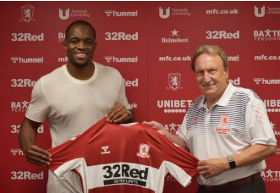 Championship outfit Middlesbrough have completed the signing of former Nigeria U23 invitee Uche Ikpeazu.
The physical and pacy striker ended his association with demoted Championship club Wycombe Wanderers by signing a three-year contract with Boro.
Last season, Ikpeazu showed Middlesbrough what he is made of when he netted a brilliant goal against them at Adams Park, one of the six goals that earned him Wycombe Wanderers' top goalscorer prize.
A product of the Reading academy, the Anglo-Nigerian-Ugandan attacker spent time on loan at Crewe Alexandra, Doncaster Rovers, Port Vale and Blackpool during his Watford days, before a permanent transfer to Cambridge United, from where he moved to Heart of Midlothian in Scotland.
Speaking on his brand new signing, manager Neil Warnock said: "I’ve always liked Uche back to when he was at Hearts and I watched him a few times.
"He looks raw at times but he’s so keen and dedicated wherever he plays and I think the fans will really get behind him because he’s such a 100% player.

"I was really impressed in my meetings with him with his dedication and desire to do well for Middlesbrough. I’m really looking forward to working with him."
The 26-year-old Ikpeazu finished second in Wycombe Wanderers Supporters' Player of the Year vote for 2020-2021.
Ifeanyi Emmanuel
Copyright ANS
All rights reserved. This material, and other digital content on this website, may not be reproduced, published, rewritten or redistributed in whole or in part without prior express written permission from allnigeriasoccer.com