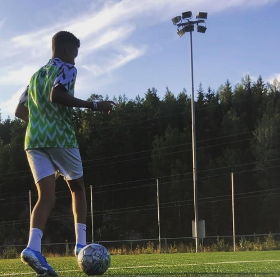 Stabæk wonderkid Antonio Nusa could be at the center of an international tug-of-war for his services between Nigeria and Norway in the near future, allnigeriasoccer.com reports.
Born on April 17, 2005, the highly-rated teenager has earned rave reviews from the Norwegian media in recent weeks following his blistering start to the 2021 campaign.
Nusa qualifies to represent Norway, where he was born, as well as Nigeria through his father.
The Norwegian Football Federation have made the first move to provisionally cap-tie Nusa by recently inviting him to an U16 training camp.
Having said that, the 16-year-old is seemingly a fan of the Nigerian national team as he has been pictured training in a Super Eagles jersey and is pals with CSKA Moscow's Nigeria star Chidera Ejuke.
The precociously talented winger was promoted to Stabæk's first team after catching the eye during pre-season training.
Nusa made his professional debut off the bench against Eliteserien powerhouse Rosenborg on May 30, netted his first senior goal against Bodo/Glimt five days ago, and bagged a brace on his starting debut vs Viking FK on June 30.
He joined Stabæk in 2013 after playing for the youth team of his hometown club Langhus IL.
Ifeanyi Emmanuel
Copyright ANS
All rights reserved. This material, and other digital content on this website, may not be reproduced, published, rewritten or redistributed in whole or in part without prior express written permission from allnigeriasoccer.com