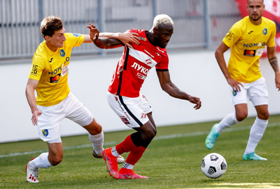 Former Chelsea wing-back Victor Moses celebrated his permanent switch to Spartak Moscow by getting on the scoresheet in their second pre-season friendly against Slovenian PrvaLiga side NK Bravo at Landskron Stadium on Friday evening.
European champions Chelsea confirmed today that the former Nigeria international has ended a nine-year association with the club after inking a two-year contract with Spartak Moscow.
The game, which ended in a 2-2 stalemate, was attended by the chairman of the board of directors of Spartak Moscow Leonid Fedun, general director Evgeny Melezhikov and sports director Dmitri Popov.
Moses made his first start of the pre-season and was in action for 72 minutes before making way for Lomovitsky.
The 2013 African Cup of Nations winner looked the most dangerous player on the pitch for Spartak, especially in the first half.
On 31 minutes, the winger saw his volley go over the bar and eight minutes later the Bravo goalkeeper made a brilliant save, palming away his effort to prevent him from opening the scoring.
Moses thought he had broken the deadlock five minutes before half-time but the goal was chalked off for offside.

Seven minutes into the second half, the Nigerian blasted the ball into the roof of the net from close range to cancel out Miha Kancilija's opener.
Spartak's Zelimkhan Bakaev made it 2-1 on the hour mark before Sandi Ogrinec's equaliser in the 85th minute.
Spartak Moscow will tackle Croatian team Sibenik on the last day of their training camp in Austria on July 5, 2021.
Ifeanyi Emmanuel
Photo Credit : spartak.com
Copyright ANS