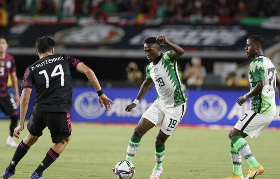 The Super Eagles comprised mainly of the Nigeria Professional Football League stars in the early hours of Sunday were defeated 4-0 by Mexico in their international friendly at the California Memorial Coliseum stadium in Los Angeles.
There was no debut for Tottenham Hotspur goalkeeper Joshua Oluwayemi who was handed a late invite and linked up with the squad in the United States a day before the game.
The former England U15 and U16 international would have stepped onto the pitch with the number 23 on the back of his jersey if he had figured.
Playing in front of 53,258 spectators, the Eagles went down 2-0 in the first four minutes.

Héctor Herrera got The Tricolor ahead in the second minute ,profiting from a sloppy clearance by the Super Eagles from a corner kick.

Two minutes later, Rogelio Funes Mori who was making his debut for Mexico grabbed the second for the north Americans after being set up  by Hirving Lozano.

Adekunle Adeleke cleared the ball inside the Eagles vital area as Mexico sought for a third goal early in the game to kill off any hopes of a fightback from Nigeria.

Enyimba forward Anayo Iwuala who captained the Nigerian side, Imo Obot Udo and Temitope Olusesi created scoring chances for Nigeria but the end product was lacking.

Mexico scored their third goal in the 52nd minute through Herrera who took advantage of a rebound after Stanley Nwabili came off his line to clear the ball.

Funes Mori had won the ball in midfield and threaded a pass onto the path of Lozano before Nwabili's futile intervention.

The rout was completed in the 77th minute through Jonathan Dos Santos who lobbed the ball above an onrushing Nigeria goalkeeper.

The Eagles surged forward afterwards in a bid to salvage some pride but only Iwuala really went close .

The Mexicans wasted a good chance to make it 5-0 in the 89th minute when Gallardo's wayward shot went horribly wide.


Izuchukwu Okosi
Copyright ANS
All rights reserved. This material, and other digital content on this website, may not be reproduced, published, rewritten or redistributed in whole or in part without prior express written permission from allnigeriasoccer.com