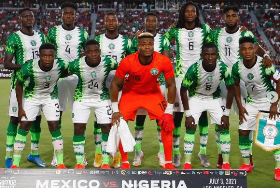 Nigeria's Super Eagles prosecuted their international friendly against Mexico early Sunday morning but it ended in a big defeat for the team assembled by a consortium of local coaches and Nigeria Football Federation technical chiefs.
Izuchukwu Okosi presents the player ratings from the game.
The Starters
Goalkeeper

Stanley Nwabili : The Lobi Stars glovesman had an average performance in this game. He tried to clear the ball from the edge of the penalty box for Mexico's third goal but it fell kindly to Herrera who had the easy job of rolling the ball in the gaping net.
This was obviously the only goal that the goalkeeper deserved to be spared some thoughts. Otherwise the other goals were by sheer wrong decisions or defensive errors. 5/10.

Imo Obot Udo : The left-back was yellow carded in the first half on Napoli foeward Hirving Lozano albeit he made a contact with the ball. In the 23rd minute he had a cross in the Mexican box but his effort was not converted.  4/10.

Adekunle Adeleke : The defender made a vital block early in the first half. Was substituted in the 66th minute. 4/10.

Olisa Ndah : Was at fault for the Mexican third goal as Hirving Lozano ghosted past him to hit a shot initially cleared by Nwabili in oal before Herrera's simple tap-in. 3.5/10.

Tope Olusesi : Olusesi had a poor game. Made a cross into the opposition box in the 32nd minute. 3.5/10.

Anthony Shimaga : The defensive midfielder was easily overran in front of the defence by the nippy Mexicans. 4/10.

Seth Mayi : The seasoned campaigner in the NPFL did not bring forth his best in the game and was duly subbed off in the second half. 4/10.

Anayo Iwuala (c) : Arguably the best Nigerian on the field who created some decent chances. A few times he was also back helping to defend against the better Mexicans. 7/10.

Uche Onwuasoanya : Not the eye-catching performance that would have had Rohr contemplate having him in the 'A' Eagles. Average. 5/10.

Ibrahim Sunusi : Had a wicked shot deflected away from goal in the 69th minute. Close. 4.5/10.

Charles Ashimene : A subdued performance by the forward who was eventually subbed off after 56 minutes. 3/10

Stephen Jude : The Kwara United forward came on for Seth Mayi. Was not a danger to the Mexicans. 3/10.

Sunday Adetunji : Came off the substitute bench for Ashimene. Full of industry but no end product necessary to change the tide. 4.5/10.

Mohammed Zulkifilu  : Made no impact after coming on for the injured Olusesi. 3/10.


Izuchukwu Okosi
Copyright ANS
All rights reserved. This material, and other digital content on this website, may not be reproduced, published, rewritten or redistributed in whole or in part without prior express written permission from allnigeriasoccer.com