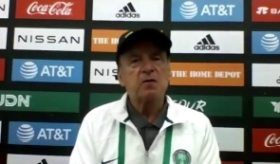 Mexico got their first two goals in the first four minutes of the contest through Hector Herrera and Rogelio Funes Mori, before second half strikes from Herrera and Jonathan Dos Santos sealed a comfortable win.
Rohr highlighted during the press conference that Nigeria fielded a young and inexperienced team comprising players who ply their trade in the local league, touched on the strengths of the Mexico national team and the upcoming World Cup qualifiers.
Here's every single word Rohr told reporters at the post-match press conference on Sunday morning.
On his assessment of the game between Mexico and Nigeria?
"I saw a wonderful game, we are very happy to see now real football games with the fans, it was a such a long time that we had to play in empty stadiums, and now it has come back to normal situation.

"Mexico are ranked 11th in the world, they showed today. Our young team, with the best professional players from Ngeria playing at home, they tried to do well and they learned a lot today.

"Me also I saw some interesting players who could be interesting for the next World Cup qualifiers in September for our list.

"Some injuries unfortunately came showing that some of our players still have to work physically. This match today we learned a lot, that's why we are happy to see this match with this conditions like a normal football game."

This is a two part question. First of all can you go deeper how you saw the Mexican national team, you know they've got new players like Rogelio Funes Mori who got the Mexican nationality a few weeks ago, and secondly what's coming next for your team especially during September and then in October when you come back to the United States?

"In September we will have the World Cup qualifiers, we start at home against Liberia, the first game on the 3rd of September in Lagos and a few days later we go to Cape Verde for the second game.

"We have a group of four teams and the fourth team is Central African Republic, we have to finish first in this group and then still to do two other games home and away against one of the other nine leaders of the other groups so it's a long way to the World Cup.

"This match today was already for me a possibility to see if some of the local players can come to us and participate in these big games.

"We want to qualify for the World Cup like the last time and then we will meet teams like Mexico who showed today really a very good football - moving very well, lot of speed, and the fitness, technique and permutation.

"It was a good lesson for our local players today and I think for me Mexico is one of the favourites of the Gold Cup."
Ifeanyi Emmanuel
Copyright ANS