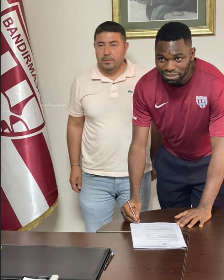 With a brief post on Instagram, Turkish First League club Bandırmaspor have announced the signing of former Nigeria U20 international Chukwuma Akabueze on undisclosed terms.
Bentley, as he is fondly called, has joined Bandırmaspor from another Turkish second-tier club ümraniyespor.
The winger has been in Turkey since 2017, with his first port of call being Boluspor.
He started his career in his homeland at Kwara United before transferring to Norwegian outfit Odds Ballklubb, where he spent four years before shifting to SK Brann also in Norway.
Bentley spent the 2013 campaign at Chinese Super League club Wuhan Zall.
A seasoned campaigner in the Turkish First League, he has totaled 130 appearances in the division, scoring 19 goals while producing 18 assists.
Although he is better known as an ex-Flying Eagles player, the 32-year-old has two caps for the Super Eagles.
Igho Kingsley
Copyright ANS