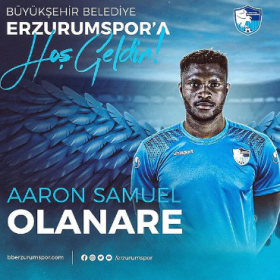 Turkish First League club BB Erzurumspor have taken to social media to announce the signing of Aaron Samuel on undisclosed terms.
Samuel has joined the relegated Super Lig team on a free transfer after the expiration of his contract at Changchun Yatai.
The 27-year-old has returned to European Football two years after departing Israeli club Beitar Jerusalem.
After leaving Beitar Jerusalem in February 2019, the attacker wore the jersey of Sichuan Longfor F.C. in China, for whom he scored nineteen goals in 27 matches, before switching to Changchun Yatai.
Samuel's other clubs include Dolphins, Valerenga, Sarpsborg 08, Guangzhou R&F, CSKA Moscow and Amkar Perm.
He has earned six caps for the Super Eagles, the last of which came in a friendly against South Africa on March 29, 2015.
BB Erzurumspor finished eighteenth in the Turkish top-flight in 2020-2021.
Igho Kingsley
Copyright ANS