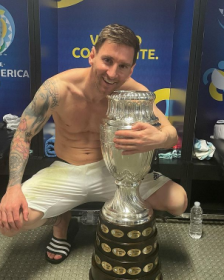 Joe Aribo was excited after Barcelona legend Lionel Messi won the Copa America with Argentina on Sunday morning.
Messi was the standout player of the Argentina youth sides that won the 2005 FIFA U20 World Cup and 2008 Olympic Games, beating Nigeria in both finals, but had not won any major silverware with La Albiceleste since his debut, prior to the Copa America showpiece vs Brazil.
The Barcelona captain lost the Copa America finals in 2007, 2015 and 2016 and was in tears after Argentina's defeat to Gemany in the 2014 World Cup final.
The 34-year-old finished the Copa America as the top goalscorer with four goals and was the joint winner of the Player of the Tournament award.
Super Eagles star Aribo was one of the players to congratulate Messi on winning the Copa America.
The Glasgow Rangers playmaker shared on his Instagram stories a photo of the Argentina number 10 posing with the Copa America trophy.
Messi is Argentina's all-time leading scorer and record appearance holder with 76 goals in 151 international appearances.
Igho Kingsley
Copyright ANS