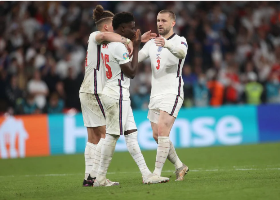 Nigeria Football Federation President Amaju Pinnick was among the spectators at Wembley Stadium in London as Italy won the European Championship for only the second time, fifty three years after the first, beating England 3-2 on penalties on Sunday night.
Pinnick , a FIFA Council Member, was a VVIP guest and was seated alongside Gianni Infantino (President of FIFA), Mr
Aleksander Čeferin (President of UEFA), Prince William and some other distinguished members of global football's upper crust at the famous Wembley.
The Three Lions got off to a fantastic start thanks to Luke Shaw with a delightful finish for his first England goal in the second minute but Italy grew as the game progressed.
A poacher's effort from central defender Leonardo Bonucci brought the game back to parity in the 67th minute, it was a good save initially from Pickford but the Juventus star was on hand to fire home the rebound.
Gareth Southgate responded by bringing on Bukayo Saka, who was only left out of the starting XI through a change of formation, to replace Trippier at minute 70.
It was difficult for Saka to get into his rhythm as he was well handled by the Italian defence especially as England were not in control of possession.
As in the case with both teams in the semifinals the game went into extra-time but it could not still separate the sides so it had to be settled by penalty kicks.
While Berardi, Bonucci and Bernardeschi were on target for the Italians in the shootout, England were unsuccessful with their last three spot kicks.
Saka, aged nineteen years, was given a big responsibility to take England's last kick but was denied by Donnarumma.
Ifeanyi Emmanuel
Photo Credit : uefa.com
Copyright ANS