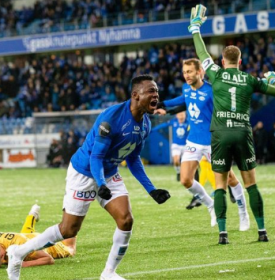 Allnigeriasoccer.com can exclusively report that Turkish Super Lig club Sivasspor are on the verge of announcing the signing of Nigerian center-forward Leke James.
James is making a return to Europe less than seven months after he left Norwegian side Molde for Al Qadisiyah FC in Saudi Arabia.
The 28-year-old has agreed a two-year deal with Sivasspor and will put pen to paper with The Braves in the next couple of days.
He will become the second Nigerian striker to join Sivasspor this summer after Shakhtar Donetsk-owned Olarenwaju Kayode, who has returned for a second loan spell.
A product of Bridge Boys in his homeland, James counts Aalesund and Beijing Enterprises as the foreign teams he has represented in the past apart from the aforementioned clubs.
He is better known for his stint with Molde, for whom he scored an impressive 43 goals in 83 appearances in all competitions while producing seven assists.
Sivasspor are competing in the second qualifying round of the inaugural UEFA Conference League.
Ifeanyi Emmanuel
Copyright ANS