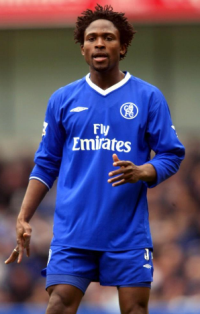 Celestine Babayaro, former Nigeria international has finally revealed that he plans to marry this year as he has given himself 2021 deadline to get married or forget about marriage altogether.
When Babayaro signed for Chelsea in 1997, he became the club's first African player in history, and made nearly 200 appearances for the Blues before shifting to Newcastle United.
Sources close to 1996 Olympics gold medalist said that he has officially met the family of his fiancée and they have given them their blessing.

"He feels bad that he is still single but he has been saying it to everybody who care to listen that this (2021) is his time for marriage and he is serious about it.

"He is currently into a serious relationship with one of the big girls in Abuja and hopefully it would end up to be fruitful. Let’s keep praying for him and hope for the best, " our source said.

Asked what has been delaying him from getting married all the while, he explained: "I don’t really know. I think it has just not worked out for him.

"I think it’s personal to him. Marriage is not what you rush into. If you do that you will rush out of it."

Babayaro,42,was in two celebrity relationships with international model, Alicia Douvall and Cassie Summer but none led to marriage as he broke up with them in 2002 and 2005 respectively.

He represented Nigeria national football team from 1995 to 2004, and was part of two Olympic squads, two World Cup squads and three African Cup of Nations squads.