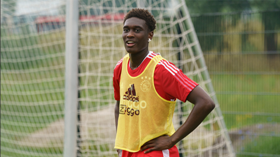 Promising Nigerian midfielder Gibson Yah, 17, has been promoted to first team training by Ajax Amsterdam manager Erik ten Hag.
The official website of Ajax Amsterdam has published training images of the team's workout held at sports complex De Toekomst on Tuesday and informed that Yah was part of the group.
Erik ten Hag is lacking his full complement of midfielders at present with Davy Klaassen, Ryan Gravenberch and Jurriën Timber given extra days off due to their involvement with the Netherlands squad at the recently concluded European Championship.
Yah is making inroads at Ajax Amsterdam, breaking into the Ajax Amsterdam U21 squad in the second half of last season.
He made his professional debut for the age group in a Keuken Kampioen Divisie clash against TOP Oss on January 5 and has so far totaled seven appearances in the division.
Signed from DVC Buiksloot in 2014, Yah made his debut for Ajax U17s on September 15, 2018 before clocking 15 years and played his first game for the U19s in January 2020.
Yah has played non-binding games for Netherlands at U15 level.
Ifeanyi Emmanuel
Photo Credit : ajax.nl
Copyright ANS