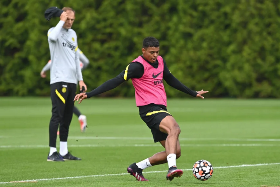 Less than a month before the start of the new Premier League season, European champions Chelsea have stepped up their preparations for the upcoming campaign with a training session held at Cobham on Tuesday, July 13, allnigeriasoccer.com reports.
With up to seventeen Chelsea first-teamers involved in the 2020 European Championship, manager Thomas Tuchel has drafted in some academy stars and returning loan players to bolster the squad.
Among the players spotted training with The Blues this week are Nigeria-eligible duo Ike Ugbo and Faustino Anjorin.
While Anjorin has high hopes for the 2021-2022 season as a Chelsea player, the same cannot be said for Ugbo who is all but set to leave his boyhood club before the window closes for business.
The Super Eagles hopeful could be leaving Chelsea without playing an official game for his boyhood club.
Ugbo's only appearance for the first team came in a non-competitive fixture against Bohemians in July 2019.
As for Anjorin, he is being fast-tracked into the first team, totaling five appearances to date including debuts in the Premier League, Champions League, FA Cup and League Cup.
Chelsea will face Arsenal and Tottenham Hotspur in friendlies early next month before their first competitive game of the new season, the Super Cup final against Samuel Chukwueze's Villarreal.
Igho Kingsley
Photo Credit : chelseafc.com
Copyright ANS