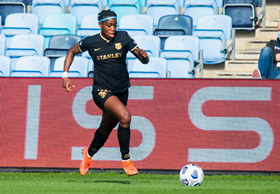 European champions Barcelona Femení are bothered by the contract situation of Super Falcons captain Asisat Oshoala.
The former Arsenal and Liverpool star could be walking away from the Spanish champions as a free agent at the end of the 2021-2022 season if she does not extend her contract.
According to respected Spanish sports daily Mundo Deportivo, Markel Zubizarreta, Barcelona's general manager of women's football, has a job on his hands to convince Oshoala and eight other players to stay at the club.
Marta Torrejón , Mapi León , Leila Ouahabi , Aitana Bonmatí , Alexia Putellas , Jennifer Hermoso , Mariona Caldentey and Lieke Martens have also entered the final year of their contracts with the Blaugranes.
The newspaper added that traditional European clubs PSG, Lyon, Chelsea, Manchester City, Wolfsburg, Bayern, Real Madrid, Juventus and Atlético Madrid are monitoring the situation of the aforementioned players including Oshoala.
The Nigeria international would be a great signing for an ambitious club because she has reached the pinnacle of her career at the age of 26.
Since joining Barcelona in 2019, first on loan before the move was made permanent, Oshoala has mustered 45 goals from 52 appearances in the Primera División Femenina.
Ifeanyi Emmanuel
Photo Credit : fcbarcelona.com
Copyright ANS