...the complete Nigerian football portal
Subscribe
'He has earned his place' - Arteta confirms Okonkwo will have another chance against Rangers
Published: July 15, 2021 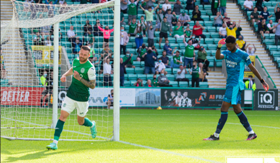 Arsenal first team manager Mikel Arteta has confirmed that Nigeria-eligible goalkeeper Arthur Okonkwo will be given more minutes in the upcoming friendly against Scottish champions Glasgow Rangers.
The England youth international was singled out for criticism following his performance in the 2-1 loss to Hibernian in the Gunners' opening pre-season fixture.
Hibernian took the lead in the 21st minute when Okonkwo failed to deal with a backpass from Cedric and Martin Boyle pounced on the error to open the scoring.
The Anglo-Nigerian ended speculation surrounding his future this month by putting pen to paper on a fresh three-year deal that binds him to the Emirates Stadium outfit until 2024 and has been promoted to the first team on a permanent basis.
In quotes relayed by Football.London, Arteta said on Okonkwo : "It's his debut so he was so excited.
"He has earned his place in the first team with everything he has done at the academy level and unfortunately, it started like that.
"But things will get better. He will have another chance on Saturday so hopefully, he can be better."
There is huge Nigerian interest in Saturday's friendly at Ibrox Stadium; Super Eagles stars Joe Aribo and Leon Balogun, plus Nnamdi Ofoborh and Calvin Bassey could be involved for Rangers, while Folarin Balogun is in contention to suit up for Arsenal.
Igho Kingsley
Photo Credit : hibernianfc.co.uk
Copyright ANS