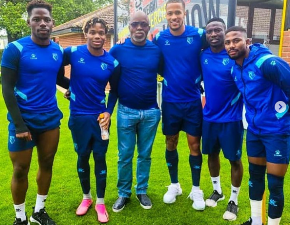 Watford new boy Dapo Mebude has given the biggest hint yet that he is open to representing the national teams by labeling Odion Ighalo 'a countryman of mine' as he discussed what attracted him to join the Hornets.
President of Nigeria Football Federation Amaju Pinnick, an advocate of players with dual-eligibility, was at Watford's training ground last weekend and was pictured with Mebude and five others players with caps for the Nigeria teams namely Oghenekaro Etebo, William Troost-Ekong, Isaac Success, Emmanuel Dennis and Tom Dele-Bashiru.
Allnigeriasoccer.com can report with certainty that Mebude, who is provisionally cap-tied to the Scottish Football Association, is considering switching his international allegiance to Nigeria, and has not yet been approached by the third country he is eligible to represent, England.
Mebude made a tough decision to leave his boyhood club Glasgow Rangers, where he spent nine years, rising through the youth team ranks before making his professional debut in May 2019 at the age of seventeen.
Ighalo, Mebude's compatriot, was a cult hero at Watford, scoring 39 goals in 100 appearances for the Golden Boys before moving to the Chinese Super League in January 2017.
Explaining why he has joined Watford over other suitors, London-born Mebude told the Hornets official website : "It's a massive club, I've watched them in the Premier League for a few years.
"I've been a fan of the Premier League and watched players like Troy Deeney, and Odion Ighalo who is a countryman of mine, so there are a lot of things that attracted me".
The 19-year-old Mebude has put pen to paper on a two-year contract at Watford, with a further two-year option.
Ifeanyi Emmanuel
Copyright ANS