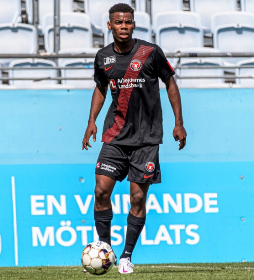 Nigerian defensive midfielder Raphael Onyedika made his competitive debut for FC Midtjylland as they were defeated 2-1 by Odense Boldklub in the opening match of the new Danish Superliga season, allnigeriasoccer.com reports.
The 20-year-old is one of the players tipped to replace Frank Onyeka in the heart of midfield and he started in that position in Friday evening's game at the MCH Arena.
Super Eagles star Onyeka was not listed in the Wolves matchday 18 with a transfer to Premier League new boys Brentford still on the cards.
Onyedika showed what he is capable of during the 2019-2020 edition of the UEFA Youth League, starring as FC Midtjylland reached the quarterfinals of the competition.
The following season, the FC Ebedei product got a taste of first-team football during a loan spell at second-tier side FC Fredericia, for whom he made 28 appearances.
The season went well for the physically strong and pacy midfielder and he was named in the Team of the Season by TV3.
OB secured all three points thanks to a 91st minute goal by Joergen Skjelvik, while Pione Sisto netted for the home team after an hour of play.
Ifeanyi Emmanuel
Photo Credit : fcm.dk
Copyright ANS