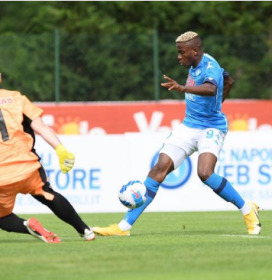 Victor Osimhen scored four of Napoli's twelve goals as the Blues got off to a winning start in their first pre-season game, thrashing Bassa Anaunia 12-0 in Luciano Spalletti's first game in charge as coach.
The feat is remarkable as the Nigeria international was in action for only forty five minutes in the first half.
Elif Elmas  netted Napoli's first goal of pre-season in the fourth minute of the contest before Osimhen doubled the advantage when he conjured up a sublime dink over the goalkeeper in the eighth minute.
The Super Eagles striker grabbed Napoli's fourth goal with a shot from the edge of the box in the 20th minute, then rounded the goalkeeper and tapped the ball into the empty net for 5-0.
Eight minutes before the break, the 2015 U17 World Cup winner bagged his fourth goal to make it 6-0, before Stanislav Lobotka scored with a long-range effort to increase the lead.
Napoli had the ball in net five times in the second half, with Gennaro Tutino, Luca Palmiero, Amato Ciciretti, Zinédine Machach and Andrea Petagna on target.
Rome-born midfielder of Nigerian descent Michael Folorunsho played the last twelve minutes for Napoli.
Igho Kingsley
Photo Credit : sscnapoli.it
Copyright ANS