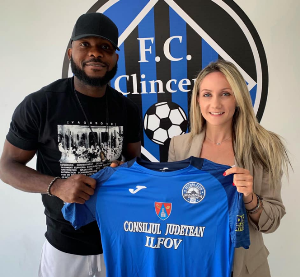 With a statement on their official website, Romanian top-flight club Academica Clinceni have announced the signing of Nigerian midfielder Michael Omoh on undisclosed terms.
Allnigeriasoccer.com understands that the 29-year-old has joined Academica Clinceni as a free agent after running down his contract at Israeli club Maccabi Ahi Nazareth.
In addition, this website has been informed by the player himself that he has put pen to paper on a two-year contract with Academica Clinceni and has been allocated the number 92 jersey for the 2021-2022 season.
Omoh is returning to Romania for a second spell after wearing the colours of Politehnica Iaşi during the 2019-2020 season, scoring 4 goals in 21 matches across all competitions.
His other foreign clubs include Dalkurd, Ostersunds, Orebro  Mjallby and Hapoel Kfar Saba.
Speaking to the Academica Clinceni official website, Omoh stated : "It's a good feeling, I have been here two years ago but I have the opportunity to come back again and I took it to come back to a great team. It's nice to be back.

"My last time in Romania I was in Iaci and after that season I heard some rumor they wanted me, I didn't want to take it because I had an opportunity to go to Israel, so when my time was finished in Israel they contacted me again and I saw they were serious with me being their player.

"I saw what they did last season, it's quite an amazing job, I went back and saw their progress it was good, I saw it as an ambitious club. The decision wasn't hard for me to take."
Omoh is a product of Mowoe Babes Warri, which produced Super Eagles and Watford midfielder Oghenekaro Etebo.
Ifeanyi Emmanuel
Copyright ANS