...the complete Nigerian football portal
Subscribe
Artetea tells Okonkwo, Balogun what to do to become a regular in Arsenal first team
Published: July 20, 2021 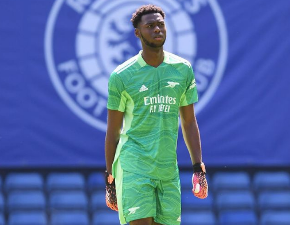 Two Nigeria-eligible youngsters in the shape of Folarin Balogun and Arthur Okonkwo have been promoted to Arsenal's first team on a permanent basis ahead of the forthcoming season.
The Anglo-Nigerian duo have risen through the academy ranks before earning first team promotion - a reward for extending their contracts in recent months.
While Okonkwo starts the season as third choice goalkeeper behind Bernd Leno and Rúnar Alex Rúnarsson, the likes of Pierre-Emerick Aubameyang, Alexandre Lacazette, Gabriel Martinelli, Nicolas Pepe, Bukayo Saka  and Willian are ahead of Balogun in the pecking order of attack-minded players at the Emirates Stadium.
Gunners boss Mikel Arteta has outlined a pathway to achieve their goal of playing regularly for Arsenal's first team, highlighting that the two players have to work hard.
"It is great. It is just a small step, but now the bigger step is trying to become a regular in the first team. That is a small step compared to the next step they have to take," Arteta said to Arsenal Media.

"That is the first thing they have to realise, the hard work is not done yet. The hard work is going to start right now, and the expectations start right now and if they have this mentality they have the potential, we believe in them and they will have the opportunities."
The Spanish coach continued : "Both of them are really different but at the same time very similar.
"They have both raised the level of the academy to a point that it wasn’t any more for them so we had to look to create the space around the first team for them to be able to develop in the way that we want them to.

"I think they are the right age and they have the space in the squad to do that and they have the hunger and they showed the desire to stay at the football club and fight to become one of the first-team regulars."
Okonkwo and Balogun were both involved in Arsenal's first two pre-season games against Hibernian and Glasgow Rangers and are in contention to travel with the squad to the United States for the Florida Cup.
Ifeanyi Emmanuel
Copyright ANS