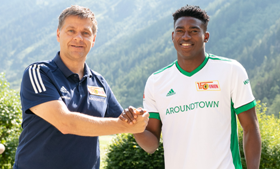 Through their official website, Liverpool have confirmed that Taiwo Awoniyi has completed a permanent transfer to Union Berlin, ending a six-year association with The Reds in the process.
The 2013 U17 World Cup-winning striker with the Golden Eaglets is returning to Union Berlin for a second spell after spending time on loan with the capital outfit in 2020-2021.
Awoniyi also took in loan spells at FSV Frankfurt, NEC Nijmegen, Royal Excel Mouscron (twice), KAA Gent and FSV Mainz 05 during his time as a player of Liverpool.
The 23-year-old has recorded 33 appearances for two different clubs in the Bundesliga, scoring six goals and registering three assists.
In his first words after his permanent switch to Union Berlin was confirmed, Awoniyi told the club's official webpage :"After lots of loan moves in previous years, I want to finally come and have a home. I owe so much to Union, so it makes me happy and proud to be back here.
"It’s fantastic to continue on the great path with the club. I will give everything to quickly pick up where I was before my injury".
Awoniyi will begin training with his Union Berlin teammates in Tirol on Tuesday and will wear the number 14 shirt for the 2021-2022 season.
Igho Kingsley
Photo Credit : fc-union-berlin.de
Copyright ANS