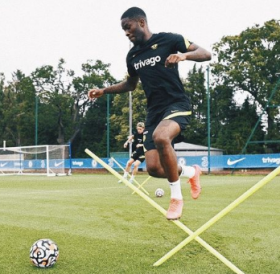 Chelsea started their summer training camp in the Republic of Ireland on Tuesday, July 20 after their flight from England to Dublin.
Allnigeriasoccer.com understands that Thomas Tuchel has taken Super Eagles hopeful Ike Ugbo to the Republic of Ireland despite speculation linking the academy product with a departure from Stamford Bridge.
With several Chelsea players who took part in the European Championship and Copa America not yet reporting for pre-season training, the German football tactician had no choice but to include Ugbo in the traveling squad.
The former England U17 star participated in Chelsea's first training session at Carton House Golf Club in Maynooth.
Ugbo worked with the likes of Tammy Abraham, Ross Barkley, Danny Drinkwater, Hakim Ziyech,  Conor Gallagher, Malang Sarr,  Dujon Sterling and Lewis Baker.
Chelsea are holding a training camp in Ireland for a week before their friendly against Championship side Bournemouth at the Vitality Stadium on Tuesday, July 27.
Racing Genk and PSV are among the teams linked with a swoop for Ugbo before the close of the summer transfer window.
Ifeanyi Emmanuel
Photo Credit : chelseafc.com
Copyright ANS