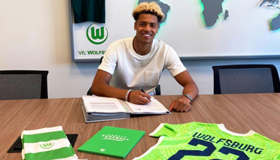 Wolfsburg have completed the signing of German-born attacking midfielder of Nigerian descent Felix Nmecha, informs the official website of the German Bundesliga side.
Nmecha has joined Wolfsburg on a free transfer following his release by Premier League champions Manchester City, where he spent almost eleven years.
An England youth international, Nmecha has put pen to paper on a three-year contract at Wolfsburg, until 2024, and becomes the club's fifth signing in the off season.
The 20-year-old has departed Manchester City after making three appearances for their first team including debuts in the Champions League, Emirates FA Cup and Carabao Cup.
"I’m pleased to be here and I’m grateful for the confidence that VfL have placed in me. I’m ready to give my best for the team and be successful," Felix Nmecha said.
Felix follows in the footsteps of his elder brother Lukas Nmecha who completed a move to Wolfsburg this month.
The younger Nmecha will begin training with his new teammates on Thursday at the training camp in Bad Waltersdorf in Austria.
For the upcoming season, Felix has been assigned the number 22 jersey.
Igho Kingsley
Photo Credit : vfl-wolfsburg.de
Copyright ANS