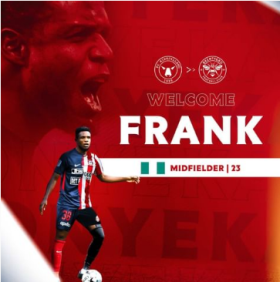 Frank Onyeka's tag of being the most expensive acquisition in the history of Brentford lasted just one day following the signing of Norway international Kristoffer Ajer from Glasgow Celtic, allnigeriasoccer.com reports.
Onyeka joined the Premier League newcomers on a five-year deal on Tuesday, July 20.
According to Danish tabloid BT, the Super Eagles midfielder cost the Bees ten million euros, making him the club's most expensive player of all time but that record has been surpassed.
This evening, Brentford announced the capture of Ajer for an undisclosed fee, subject to international clearance, completing a medical prior to inking a multi-year contract.
Though Celtic and Brentford have not revealed the transfer fee, multiple press reports including The Scottish Sun suggest that the Norwegian cost £13.5m plus add-ons.
The Hoops have already signed former Nigeria U23 invitee Osaze Urhoghide as a possible replacement for Ajer.
Onyeka arrived in England on Monday and will undergo a period of quarantine before joining with the Brentford squad for training.
Ifeanyi Emmanuel
Photo Credit : brentfordfc.com
Copyright ANS