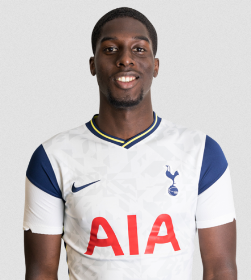 Anglo-Nigerian youngster Tobi Omole continues to make progress since transferring to Tottenham Hotspur from north London rivals Arsenal last October.
The 21-year-old joined Spurs on a deal until the end of the 2020-2021 season but the contract was extended after a string of brilliant performances for the U23s in the Premier League 2.
Four days after he was handed his non-competitive debut off the bench by manager Nuno Espirito Santo in a 1-1 draw at Leyton Orient, the Portuguese football tactician named the versatile defender in his starting lineup for Wednesday night's friendly against Colchester United.
Playing at left-back, Omole was on parade at the JobServe Community Stadium in Essex for 66 minutes before making way for Kallum Cesay.
Omole played with the number 44 kit and Super Eagles invitee Joshua Oluwayemi, an unused substitute, wore number 46.
Eleven minutes into his pre-season, Heung-Min Son opened the scoring, an outstanding goal from Lucas Moura made it 2-0 at minute 14 before Dele Alli cleverly flicked the ball in to wrap up the scoring in the 38th minute.
Before their Premier League opener against Manchester City, Tottenham will face MK Dons, Chelsea and Arsenal in pre-season friendlies.
Igho Kingsley
Photo Credit : tottenhamhotspur.com
Copyright ANS