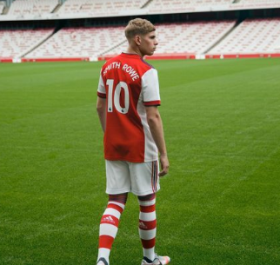 Six Arsenal, Chelsea and Tottenham Hotspur academy products of Nigerian descent have congratulated Emile Smith Rowe following the announcement that he has signed a new long-term deal at Arsenal.
Arsenal informed via their official website on Thursday that Smith Rowe has committed his future to the club and has been assigned the iconic number ten shirt previously worn by the likes of Mesut Ozil, Jack Wilshere, Robin van Persie, William Gallas, Dennis Bergkamp and Paul Merson.
The 20-year-old has been with the Gunners since U10 level and rose through the ranks before becoming an established member of the first team squad, making 33 appearances in all competitions last season.
Reacting to his new deal, Smith Rowe posted on Instagram : "📝New season.New contract.New number".
Tottenham Hotspur academy product Nonso Madueke, Chelsea starlet Tariq Uwakwe and Arsenal academy products Arthur Okonkwo, Folarin Balogun, Tobi Omole and Miguel Azeez were quick to congratulate Smith Rowe on his new contract.
Here's how they reacted to his post on Instagram :
Nonso Madueke : "Try cap to me 🤥".

Tariq Uwakwe : "Yeah cold 🥶"
Hale End Academy graduates Okonkwo and Balogun committed their futures to Arsenal in recent months and have both been promoted to the first team on a permanent basis.
Ifeanyi Emmanuel
Copyright ANS