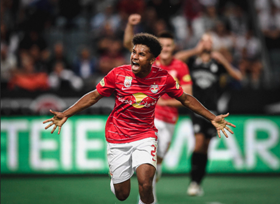 German-Romanian-Nigerian center forward Karim Adeyemi was the star of the show as Red Bull Salzburg began the new season with a 3-1 road win over Sturm Graz at the Merkur Arena (Graz) on Friday night.
The home team took the lead when Andi Ulmer put the ball into his own net in the 11th minute but the assistant referee initially ruled the goal out for offside.
For the first time ever in the Austrian Bundesliga, the referee called on VAR and it took close to five minutes before the experts in Vienna awarded the goal to Sturm Graz.
Midway through the second half, Adeyemi chested in the equaliser before Rasmus Kristensen made it 2-1 with a header after a delightful cross from the Germany youth international in the 76th minute.
Five minutes from time, Adeyemi smashed the ball home to seal a win for the Bundesliga champions.
Nigerian-born striker Chukwubuike Adamu replaced the number 27 with three minutes left on the clock but former Golden Eaglets captain Samson Tijani was not in the 18.
Red Bull Salzburg face Atlético de Madrid in a friendly on July 28 before their first home game of the season vs Ried next weekend.
Igho Kingsley
Photo Credit : redbullsalzburg.at
Copyright ANS