...the complete Nigerian football portal
Subscribe
The reason Irish-Nigerian wonderkid has been left out of West Ham squad versus Glasgow Celtic
Published: July 24, 2021 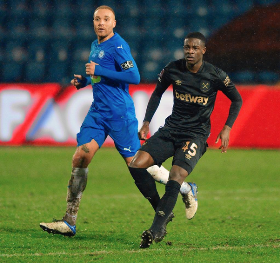 Irish-Nigerian wonderkid Mipo Odubeko was left out of West Ham's traveling party to Glasgow for their pre-season friendly against Scottish Premiership giants Celtic on Saturday afternoon.
Allnigeriasoccer.com can exclusively report that Hammers boss David Moyes decided to erase his name from the list of players he took to Celtic due to fitness issues.
Odubeko had been in line to face Celtic, only for the talented teenage striker to suffer a minor head collision in training on Thursday, July 22.
The former Manchester United schoolboy started the friendly between West Ham and Northampton Town eleven days ago, before playing for half an hour against Reading on Wednesday.
This coming season, Odubeko is aiming to build on his brilliant form for West Ham youth teams in 2020-2021 that saw him score a remarkable 10 goals in nine matches in the Premier League 2.
The 18-year-old was on the periphery of the first team last season, making the matchday squad for Premier League games on eighteen occasions and featured in two FA Cup games.
Ifeanyi Emmanuel
Copyright ANS