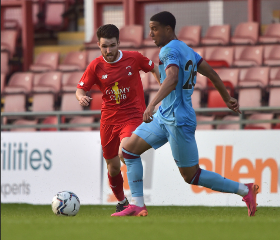 West Ham United registered an impressive 6-2 rout of Glasgow Celtic in a pre-season friendly staged at Celtic Park on Saturday afternoon, with summer signing Armstrong Okoflex getting on the scoresheet for the Premier League side.
The 19-year-old, a former Arsenal schoolboy, was on the books of Celtic for three seasons prior to his move to the Hammers on a 2+1 year deal last month.
Okoflex has been in fine form for West Ham U23s in pre-season, so much so that he has been handed call ups for a few matches played by the senior side.
He entered the game as a substitute thirteen minutes from time, replacing Algeria international Said Benrahma.
Eight minutes after his introduction, Okoflex wrapped up the scoring with a brilliant left-footed shot into the bottom corner after his cross for Bowen was blocked.
West Ham's other scorers were Michail Antonio (2), Mark Noble, Said Benrahma and Jarrod Bowen, while Callum McGregor and Ryan Christie netted for Celtic.

2019 Nigeria U23 invitee Osaze Urhoghide came off the bench for Celtic in the 55th minute with the scores at 4-2.
Igho Kingsley
Photo Credit : whufc.com
Copyright ANS