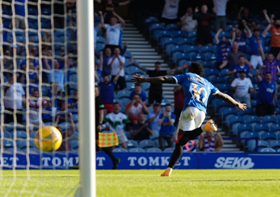 Scottish Premiership champions Glasgow Rangers claimed an impressive 2-1 win against La Liga giants Real Madrid at Ibrox Stadium on Sunday evening.
Though the official website of Real Madrid billed it as Los Blancos' first friendly of the pre-season, they'd already faced Fuenlabrada and Rayo Vallecano  behind closed doors in training ground matches before their trip to the United Kingdom.
Carlo Ancelotti picked Marvin Akinlabi in his matchday squad and introduced him off the bench fifteen minutes into the second half, about the same time Steven Gerrard brought on Calvin Bassey while Leon Balogun played the last four minutes.
It took the visitors eight minutes to break the deadlock through Rodrygo , who coolly finished into the far corner following a quick counter-attack launched by Martin Odegaard.
Fashion Sakala raced away from his marker and rifled his shot into the bottom corner to make it 1-1 at minute 55 before Cedric Itten netted what proved to be the winning goal thirteen minutes from time.
Nigeria international Joe Aribo was left out of Rangers matchday squad for the third consecutive game after missing previous clashes with Arsenal and Brighton & Hove.
Today's game against Real Madrid was Rangers' final pre-season friendly before their first competitive game of the new season against Livingston.
Ifeanyi Emmanuel
Photo Credit  : rangers.co.uk
Copyright ANS