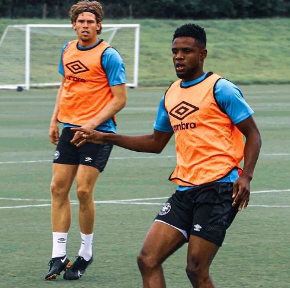 Newly-signed Brentford midfielder Frank Onyeka has put himself in contention to make his non-competitive debut for his new employers when the Premier League new boys take on Manchester United in a high profile friendly on Wednesday evening.
The Super Eagles star took to social media on Sunday to announce that he has started training with his new teammates at the Bees, accompanied by a photo of him wearing the Brentford training kit.
Prior to yesterday's workout, Onyeka could not take part in pre-season activities as he was undergoing a period of quarantine following his arrival in the United Kingdom on Monday, July 19.
The former FC Midtjylland star underwent individual training at his past club before sealing a transfer to Brentford, but has not played a game, official and non-competitive, since taking to the pitch against Aarhus GF on May 24, 2021.
Brentford have a one hundred percent record in pre-season, beating Watford, AFC Wimbledon and Boreham Wood, before their trip to Old Trafford.
Onyeka has faced British teams in the past, starting both matches against Glasgow Rangers in Europa League qualifying in August 2019, before starring versus Liverpool in the UEFA Champions League last season.
Ifeanyi Emmanuel
Copyright ANS