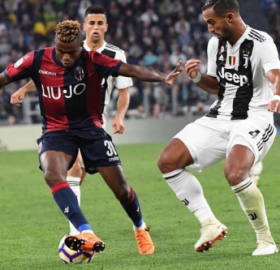 With a statement on their official website, Italian Serie A club Bologna have announced that they have sold the right to the sporting performances of  2015 U17 World Cup-winning striker Orji Okwonkwo on a temporary basis to A.S. Cittadella.
The former Golden Eaglets, Flying Eagles and Dream Team VII star will remain on the books of A.S. Cittadella until June 30, 2022.
This brings an end to speculation surrounding the future of Okwonkwo, with earlier reports linking him with a a second loan move to Reggina, which was quickly dismissed by his agent Femi Olaniran of Quintessence Sports Management.
The 23-year-old, a product of Football College Abuja, is embarking on his fifth loan spell since his move to Bologna after starring at the 2015 U17 World Cup.
He previously enjoyed loan stints at Brescia, Montreal Impact (twice) and Reggina.
In 30 outings for Bologna's first team, Okwonkwo has found the net three times and has an assist to his name.
A.S. Cittadella finished sixth in the Italian second tier in the 2020-2021 season.
Igho Kingsley
Copyright ANS