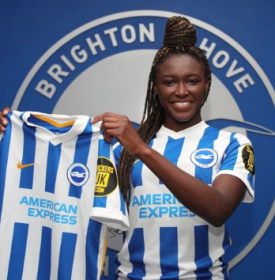 Through their official website, Brighton & Hove have confirmed the signing of Nigeria-eligible winger Rinsola Babajide on loan from Championship club Liverpool FC Women.
The ex-England U20 international will be spending the whole of the 2021-2022 campaign at the Seagulls.
Before her celebrated move to Liverpool in January 2018, she wore the colours of Crystal Palace, Millwall Lionesses and Watford.
Babajide was angling for a move away from her parent club to improve her chances of making her senior debut for the Three Lionesses.
The 23-year-old was part of the England squad that finished third at the 2018 Women's U20 World Cup and was called up to a Lionesses training camp last September.
Speaking after the deal was confirmed, Babajide told Brighton's official webpage : "I've got aspirations to play international football and I think that Hope can push me to get to the very top.

"Knowing Hope's success from when she was manager of England, she knows what it takes to play at the highest level."
Babajide was crowned Liverpool FC Women Player of the Season for the 2019-2020 campaign.
Igho Kingsley
Copyright ANS