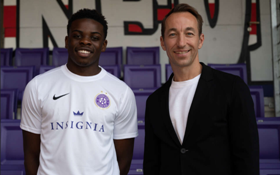 German Bundesliga club RB Leipzig have loaned out promising Anglo-Dutch-Nigerian striker Noah Ohio to Austria side Austria Vienna for the entirety of the 2021-2022 season.
This is the second time Ohio has been loaned out by RB Leipzig to get more minutes and continue his development, having spent the second half of last season at Vitesse in the Netherlands.
The 18-year-old played for the youth teams of FC Almere , Manchester United and Manchester City prior to his move to Germany in the summer of 2019.
Speaking after the deal was confirmed, Ohio told Austria Vienna's official website : "I am very happy to be here. Austria is a great club along with 110 years of history, it means the next step in my development.
"I've been really warmly welcomed by everyone and hope to play my part in the success."
Ohio has directly participated in nineteen goals (16 goals, 3 assists) in eighteen matches for RB Leipzig's U17 and U19 teams.
He made his professional debut against VVV Venlo in January 2021 - one of the four matches he was involved in during his loan spell at Vitesse.
Igho Kingsley
Photo Credit : fk-austria.at
Copyright ANS