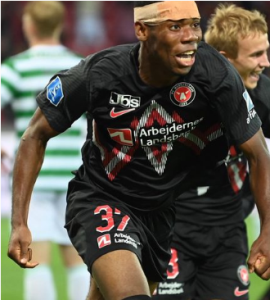 FC Midtjylland are through to the third qualifying round of the UEFA Champions League after beating Glasgow Celtic 2-1 at the MCH Arena on Wednesday evening.
No Nigerian player made the starting lineup, with Raphael Onyedika and Osaze Urhoghide among the substitutes for the Wolves and Hoops respectively.

Callum McGregor gave the visitors a crucial lead when he pounced on a loose ball and curled the ball into the net from the edge of the box two minutes into the second half.

Onyedika entered the fray in the 59th minute, replacing Brazilian midfielder Charles, and almost made an immediate impact when he fired a cut-back across the Celtic goal but goalkeeper Scott Bain made a good save.

Awer Mabil, assisted by Sisto, headed in from six yards out to restore parity for Midtjylland on 61 minutes.

Neither side could find another goal and so the tie went into extra-time, the first half of which saw Onyedika score what proved to be the winning goal after he was found by Mads Kristian Hansen.

It was Onyedika's first strike for FC Midtjylland in his fourth match for the first team.
Urhoghide, sporting Celtic's number 26 shirt, watched proceedings from the bench for the entirety of the game.
Ifeanyi Emmanuel
Photo Credit : fcm.dk
Copyright ANS