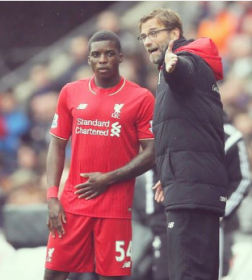 Nigeria Football Federation target Sheyi Ojo is keeping up his fitness by training with Liverpool U23 team ahead of a departure from the Anfield club in the summer transfer window.
The 2017 U20 World Cup winner with England is not in the plans of manager Jurgen Klopp for at least the first half of the forthcoming season, with the German omitting him from the first team's training camp in Austria.
Ojo is on the radar of German Bundesliga club Bayer Leverkusen as a primary target to replace Demarai Gray who recently switched to Everton.
Liverpool U23s continued their pre-season preparations with a 6-0 rout of Caernarfon Town at the Academy on Wednesday night, with the Anglo-Nigerian among the scorers.
Ojo doubled Liverpool's lead with a close range header after Tom Clayton's shot was saved.
Also on the scoresheet for Barry Lewtas' side were Max Woltman, Melkamu Frauendorf and Fidel O'Rourke, who netted a hat-trick.
The 24-year-old Ojo has taken in loan spells at Wigan Athletic, Wolverhampton Wanderers, Fulham, Reins, Glasgow Rangers and Cardiff City since joining Liverpool.
Ifeanyi Emmanuel
Copyright ANS