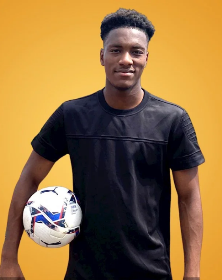 EFL Championship club Fulham, through their official website on Wednesday, July 28 confirmed the temporary departure of Nigeria-eligible striker Timmy Abraham to Newport County.
Timmy, younger brother of popular Chelsea striker Tammy Abraham, has joined the Welsh outfit on a season-long loan in search of regular first team football.
The 2000-born attacker previously had three loan spells at Bristol Rovers,  Plymouth Argyle and Raith Rovers.
Timmy Abraham began his career at the youth team of Charlton Athletic before switching to Fulham in 2017.
Subject to EFL and international clearance, he could make his competitive debut for The Exiles when they take on Oldham Athletic n their League Two opener on Saturday 7th August.
Abraham has yet to make his official debut for Fulham's first team since joining the club but has impressed for their academy teams, scoring sixteen goals in 59 appearances.
He is Newport County's ninth signing of the summer transfer window.
Igho Kingsley
Photo Credit : newport-county.co.uk
Copyright ANS