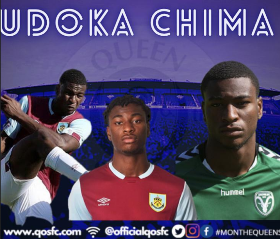 Scottish Championship club Queen of the South have pulled off a transfer coup by signing 19-year-old Nigeria-eligible defender Udoma Chima.
Queen of the South have informed via their official website that Udoka has put pen to paper on a two-year contract, adding that he has recently been on trial with Coventry City and Newcastle United following his departure from Burnley.
The center back also attracted attention from Portuguese clubs Benfica and Sporting Braga prior to agreeing terms with Queen of the South following a successful trial.

Allnigeriasoccer.com has been told that Udoka chose Queen of the South over his other suitors because he was offered the chance to play first team football, whereas he would have been signed for the U23s if he had moved to either Coventry or Newcastle.
"Udoka has been on trial with us for the last 10 days or so and has shown us that he is a strong tall centre back," manager Allan Johnston told the official website of The Doonhamers.

"Although young he has spent time with some big clubs in England and his experience at youth football will have set him up for the challenge.

"We have been short of defenders so I’m delighted to have added his strength to the squad and look forward to working with him".
Queen of the South brand new number 4, Udoka could make his professional debut against Partick Thistle on Saturday, subject to international clearance.
Ifeanyi Emmanuel
Copyright ANS