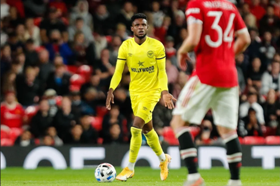 Frank Onyeka had his first taste of English football against Manchester United on Wednesday night, playing for around half an hour at one of the famous grounds in the world, Old Trafford.
It was a hell of a game to watch with both teams scoring some fantastic goals in an entertaining 2-2 draw.
The Nigeria international missed Brentford's friendly against Watford on July 24 because he had to quarantine upon his arrival in the United Kingdom.
When asked how he found the game versus the Red Devils, Onyeka told Brentford's official website  : "It was good to get my first minutes, it was amazing playing in Old Trafford, watched Old Trafford on television and I get to play yesterday. It was pretty and a good experience for me as well.

"It was pretty intense and the pace of the game was high, it was really fast. At some point it was difficult to get along but that's how it is in the Premier League."
The Brentford number 39 showed glimpses of his all-action style when he came on, stamping on the toe of Jesse Lingard in the 64th minute before an unnecessary foul on young Tunisia international Hannibal Mejbri in the 76th minute.
In the 85th minute, Onyeka got a taste of his own medicine when he took a whack in his foot, James Garner the culprit with his studs showing, and the Nigerian required treatment on the pitch after the bad, late tackle from the United midfielder.
The Super Eagle looked uncomfortable for the last couple of minutes and has emerged as an injury doubt for Brentford's clash against West Ham United at the Brentford Community Stadium on Saturday afternoon.
"You know I'm Frank 'The Tank', so of course few days it's going to be fine, it's just a little pain so nothing to worry about.

"I love a tackle, actually I gave one before I got one, so it's normal for me when I get tackled. I think the guy (Garner) was pretty hard on me," Onyeka said.
Brentford are undefeated in all their pre-season fixtures so far, beating AFC Wimbledon, Boreham Wood and Watford and drawing with Manchester United.
Ifeanyi Emmanuel
Photo Credit : brentfordfc.com
Copyright ANS