...the complete Nigerian football portal
Subscribe
'I always back myself' - Arsenal striker Balogun full of confidence ahead of new season
Published: July 31, 2021 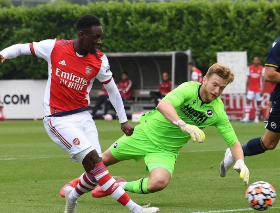 Arsenal striker Folarin Balogun is full of confidence ahead of the start of the 2021-2022 campaign.
The Anglo-American-Nigerian whizkid has been rewarded for committing his future to his boyhood club, with the Gunners officially promoting him to the first team and handing him the number 26 kit.
One of the most promising players produced by Arsenal's Hale End Academy in recent years, Balogun has been tipped for big things after starring in last season's Europa League where he was involved in three goals in five appearances off the bench.
Playing a hybrid role of half left winger and half striker, Balogun opened his goalscoring account in pre-season as Arsenal thrashed Championship side Millwall 4-1 at Bell Lane last weekend.
"I feel it's important to be in the first team changing room with the rest of the players. You feel like you are actually, fully involved," Balogun said in Arsenal's matchday programme for the visit of Chelsea.

"That's something I'm really happy with, I feel like more a part of the set up and that helps on the pitch as well.

"I always back myself. The more you prepare for something, the more confident you get, so I just need to keep working hard and sharpening up my tools."
Balogun is expected to be involved in some capacity for Sunday's match at the Emirates Stadium.
Igho Kingsley
Photo Credit : arsenal.com
Copyright ANS