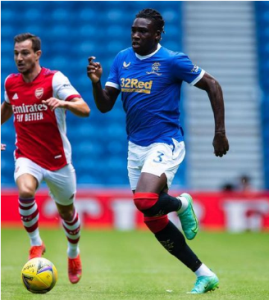 The official website of UEFA has published Rangers squad list for the third qualifying round of the Champions League ahead of their massive games against Malmo.
Nigeria underage international Nnamdi Ofoborh has been omitted from the roster by manager Steven Gerrard.
The former Flying Eagles star has not figured for the Scottish champions in pre-season after medical scans discovered that the central midfielder has a possible heart issue.
2019 Golden Eaglets invitee Malcolm Ebiowei is not eligible to be registered on Rangers List B as he has spent less than two years at the club after joining from Arsenal.
All of the players of Nigerian descent who featured for Rangers first team in pre-season have made the squad list, including Super Eagles duo Joe Aribo and Leon Balogun, and left-back Calvin Bassey.
Bassey, Aribo and Balogun will wear the number 3, 17 and 26 respectively for the Champions League qualifying rounds.
Nigerian midfielder Innocent Bonke has been selected in Malmo's List A; he has been involved in all the four matches played by the Swedish Allsvenskan side in the Champions League qualifiers in 2021-2022.
Rangers travel to Sweden for the first leg on August 3 and host the Scandinavians at the Ibrox Stadium in the return leg a week later.
Ifeanyi Emmanuel
Photo Credit : rangers.co.uk
Copyright ANS
All rights reserved. This material, and other digital content on this website, may not be reproduced, published, rewritten or redistributed in whole or in part without prior express written permission from allnigeriasoccer.com