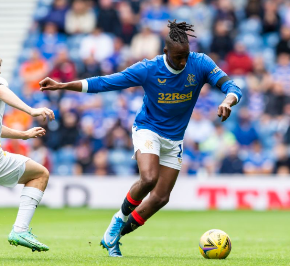 Glasgow Rangers started the defence of their Scottish Premiership title with a 3-0 win over Livingston at Ibrox Stadium on Saturday afternoon.
Super Eagles star Joe Aribo made his first appearance for the Light Blues in three weeks and joining the midfielder in the starting lineup were left-back Calvin Bassey and central defender Leon Balogun.
Former Nigeria U23 invitee Ayo Obileye, a summer signing from Queen of the South, made his league debut for the visitors.
An early goal from Ianis Hagi was the difference at the interval, the Romanian fired into the back of the net, assisted by James Tavernier, before going off injured.
The champions pushed for a second goal and it arrived in the 78th minute as Scott Wright finished superbly with the outside of his right foot, before Kemar Roofe wrapped up the scoring in the 90th minute.
While Aribo lasted 64 minutes on the pitch, Balogun and the impressive Bassey played the full game.
Rangers return to action on Tuesday when they face Swedish side Malmo in the third qualifying round of the UEFA Champions League.
Igho Kingsley
Photo Credit : rangers.co.uk