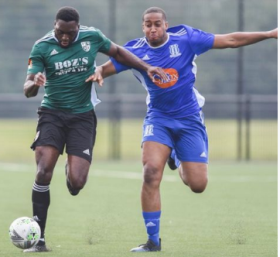 A fantastic second half performance saw National League side Woking come back from three goals down to beat Chelsea U23s 4-3 in their final home pre-season friendly staged at the Laithwaite Community Stadium on Saturday afternoon.
Faustino Anjorin and Bryan Fiabema were not in the Chelsea matchday squad, while Woking's number 9 Inih Effiong started on the bench.
The visitors led 3-0 at the interval through goals from Jayden Wareham, Thierno Ballo and Broja.
Woking reduced the deficit when central defender Diarra rose highest to head home a corner in the 51st minute.
Effiong and Nwabuokei stepped off the bench to replace Oakley and Champion respectively nine minutes into the second half.
Campbell and Max Kretzschmar scored to restore parity before Effiong netted the game-winning goal in the 82nd minute.
The Anglo-Nigerian attacker drove forward with the ball and unleashed a shot from 20 yards out which found the bottom corner to completely turn the game around for Woking.
The 30-year-old Effiong returned to Woking for a second spell in the summer transfer window after running out of contract at Stevenage.
Ifeanyi Emmanuel
Photo Credit : wokingfc.com
Copyright ANS
All rights reserved. This material, and other digital content on this website, may not be reproduced, published, rewritten or redistributed in whole or in part without prior express written permission from allnigeriasoccer.com