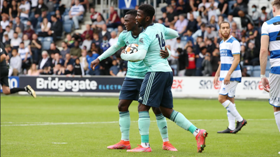 Five players of Nigerian descent were on target for their respective clubs in pre-season matches on Saturday, July 31.
At the Van Donge & De Roo Stadion (Rotterdam), Emanuel Emegha scored the last goal of the game as Sparta Rotterdam thrashed Excelsior 3-0.
The 2003-born Dutch-Nigerian center forward was actually substituted at half-time but re-entered the game in the 88th minute following the injury sustained by Reda Kharchouch.
Leicester City are still searching for their first win this pre-season after holding Queens Park Rangers to a 3-3 draw at the Kiyan Prince Foundation Stadium.
A penalty kick from substitute Kelechi Iheanacho in the 89th minute ensured it finished 3-3.
At the Liberty Stadium, Southampton defeated Swansea City 3-1 with Super Eagles target Nathan Tella among the scorers for the Premier League team.
The former Arsenal schoolboy fired through the legs of Benda in the 16th minute, making it 1-1 after Mohamed Salisu had put the ball into his own net.
Super Eagles striker Victor Osimhen continued his rich vein of form in pre-season by scoring a brace as Napoli thrashed German champions Bayern Munich 3-0 at the Audi Football Summit.
The former Wolfsburg man opened the scoring in the 69th minute after Bayern gave away the ball in their own half and doubled the advantage two minutes later.
Finally, Manchester City made it two wins in as many pre-season games, thrashing Championship side Barnsley 4-0 at the Academy Stadium.
England youth international Samuel Edozie, in his first start for the Premier League champions, opened the scoring with a tap in at the back post in the 23rd minute - his second goal in two games for the first team.
Igho Kingsley
Photo Credit : lcfc.com