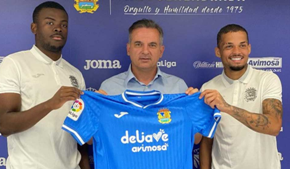 Italian-Nigerian defender Paolo Gozzi was unveiled as a player of Spanish LaLiga 2 club CF Fuenlabrada this week.
CF Fuenlabrada have signed the 20-year-old on a temporary basis, until the end of the 2021-2022 season, with an option to buy him outright inserted into the loan deal.
Gozzi opted to move to CF Fuenlabrada in search of regular first team football and continue his development rather than playing for Juventus U23s in the third tier of Italian football as was the case last season.
He started his career at Pozzomaina, where he spent three years, before transferring to Juventus in 2015.
The highly-rated youngster made his Serie A debut for Juventus against SPAL in April 2019 - his only squad involvement to date for the first team.
"It is a very big opportunity for me. My qualities are speed, being very strong physically, a good left leg and a hard worker," Gozzi was quoted as saying by fuenlabradanoticias.com at his presentation.
Gozzi came off the bench for the last fifteen minutes of CF Fuenlabrada's 2-0 win over Kenneth Omeruo's Leganes in a pre-season friendly on Wednesday.
He has racked up more than forty appearances for Italy U16, U17 and U19 national teams.
Ifeanyi Emmanuel
Photo Credit : cffuenlabrada.es
Copyright ANS